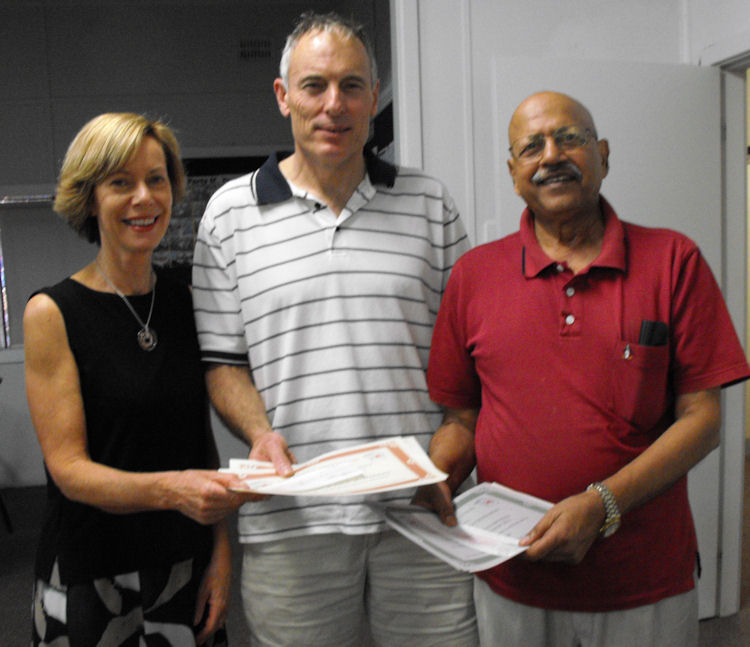 2015 winners of the top UHMP prize

The final results for the inaugural Under 100 Masterpoints Championships are now available.

Congratulations to Ken and Susan McMahon from Wagga Wagga, the winners of the the top prize of an ABF grant of $2000 to attend the Restricted Butler Pairs at the Brisbane ANC.

The Finals of the 2015 John Arkinstall State Teams were held at the NSWBA on December 11-13. 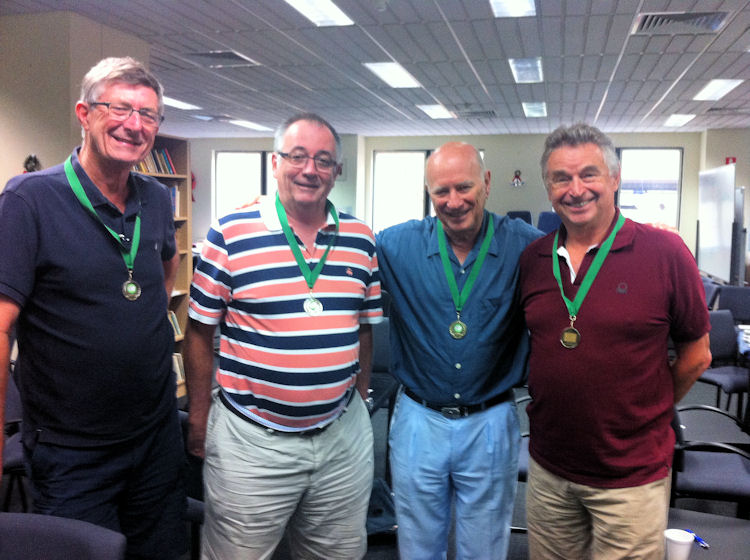 The winners of the State Open Teams Final were:

The winners of the Country Teams Playoff representing the Northern zone were:

Winners in the State Novice and Restricted Teams held at the Brisbane Water Bridge Club on December 5-6 were:

The NSWBA Interstate Teams Selection events will have a slightly different format next year.

The winners of the Swiss Pairs Congress were:
Donald Knaggs and Albert Tjahja

The Annual General Meeting of the NSWBA will be held at the NSWBA premises on Wednesday December 9, 2015 commencing at 6:30pm. The Agenda and Annual Report is now available online.

There will be a 2 session event hosted by the North Shore Bridge Club in conjunction with the NSWBA on November 29 for all players who did not compete in a club qualifying event.

Congratulations to the Winners!

The next Club Level Directors' course will be held at Trumps on Sunday, November 15.

The finals of the NSW Country Carnival were held at the Port Macquarie-Hastings Club on October 3-4. The overall Zonal winner was Outer Metropolitan.

The next Teacher Training Program Workshop conducted by Joan Butts will be held at Brisbane Water on October 31 - November 1.

This year’s winners were Helen and Eric Taylor from Leeton Soldiers Bridge Club with an average score of 67.25 %. Congratulations on a great effort.

There were 343 pairs competing in 24 different clubs.

Certificates for the top placed pair in each club, cheques for overall place getters and Bridge Shop gift cards for sessional winners and restricted winners will be mailed to clubs at the beginning of October.

Go to www.abf.com.au and you will find the link.

The teachers forum lunch at Coffs Harbour was hailed as a great success.

ABDA are holding a Weekend of Seminars and Workshops for Bridge Directors in Hobart, on the 19th and 20th September 2015. Brochure

The ASE9 and Bridgemate problem resolution workshop for club directors has been scheduled for Saturday, 19th September, from 9:30 to 11:30 at the Peninsula Bridge Club.

Bridge teachers are invited to a lunch funded by the NSWBA and hosted by the ABF National Teaching Coordinator, Joan Butts, together with panel experts, including Will Jenner-O’Shea to be held during the Coffs Coast Gold Congress, August 14. 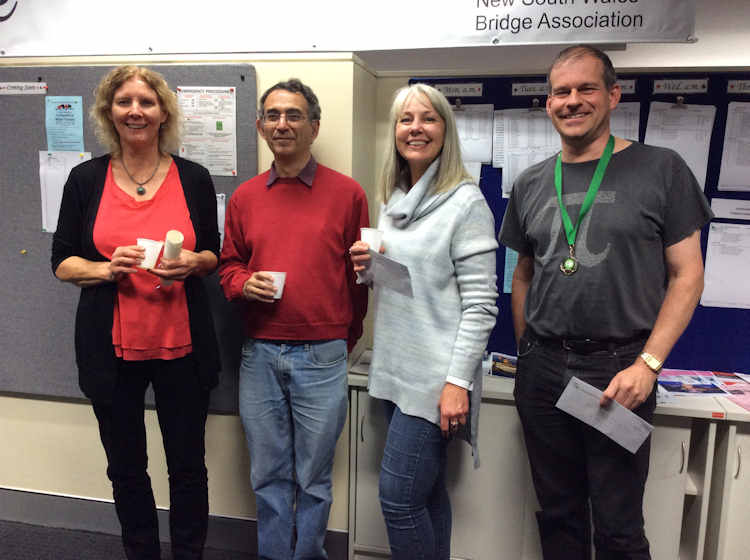 44 players played in the 2015 State Individual held at the NSWBA on Saturday August 1. The winner was Julian Foster. 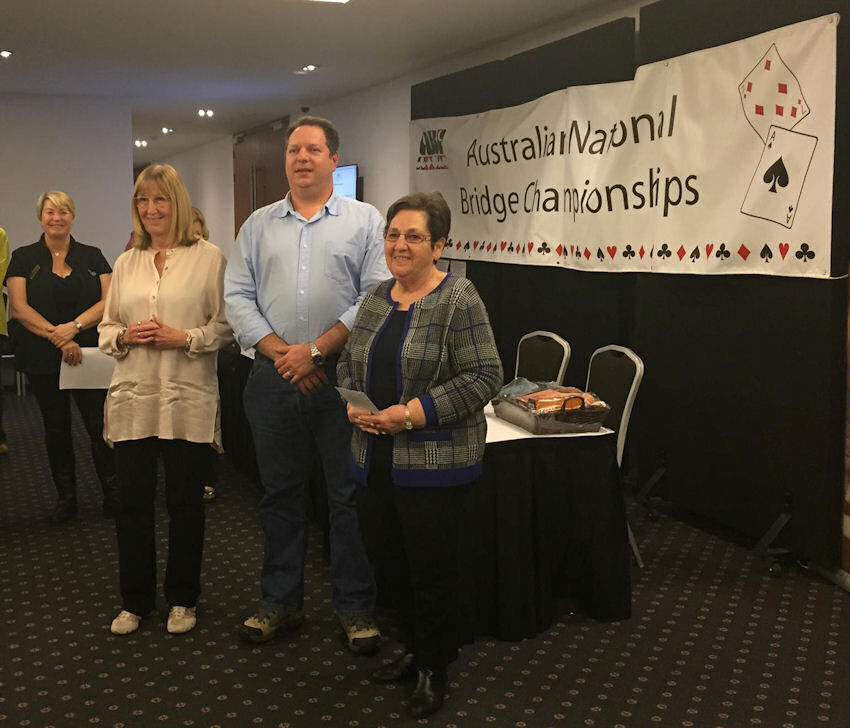 Congratulations to Marilyn Chadwick and Toni Sharp who won the Women's Butler Pairs. 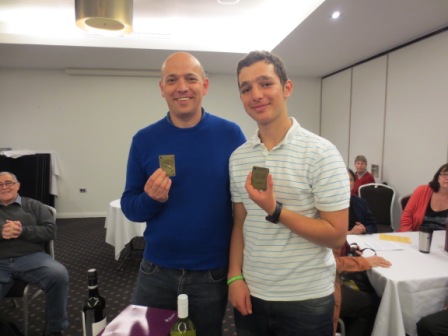 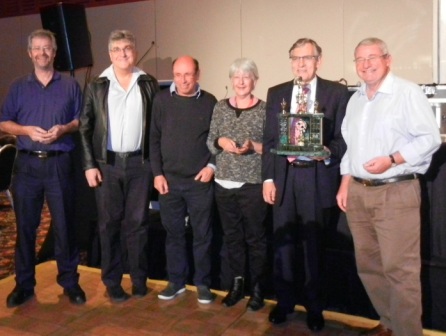 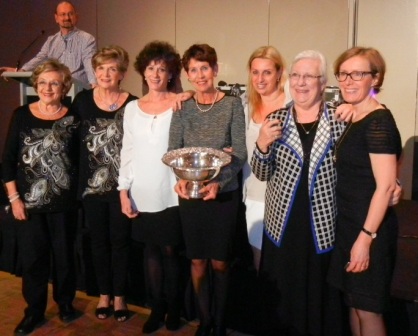 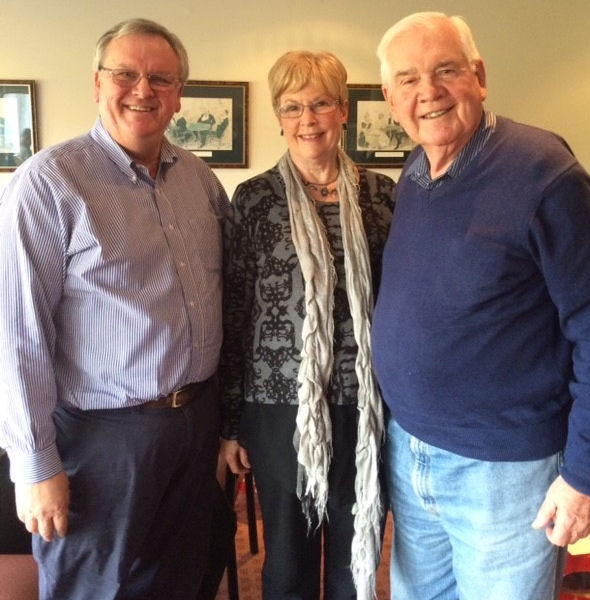 The inaugural State Veteran Pairs Championship was held at the Bowral Golf Club on July 10-12. The winners were Berenice and Ross Folkard.

Your last chance to qualify directly to the GNOT Finals starts Thursday 30th July 7:30pm at the North Shore Bridge Club. This five week knock-out event sees the top seventh go to the next stage. The winners go directly to the National Final in Tweed Heads and the others qualify for the Metropolitan Final. Entries close at 1:00pm on Wednesday 29th July. More details on the NSBC Website. 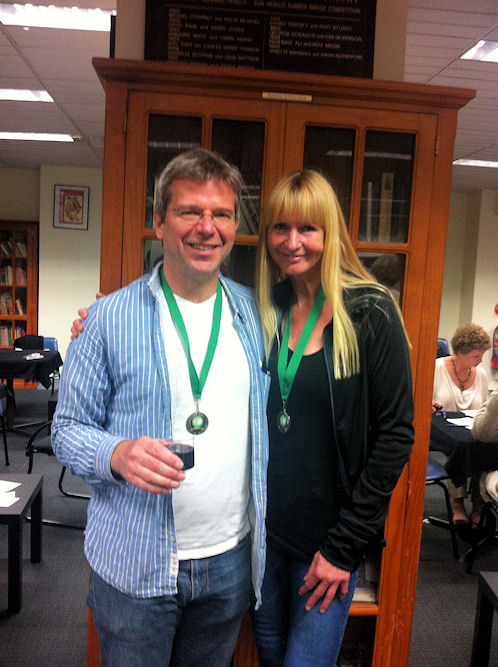 The State Mixed Pairs was held at the NSWBA on May 23-24. The winners were Andre Korenhof - Carola Hoogervorst. The Country Mixed Pairs was won by Stephen and Liz Hurley.

CONGRATULATIONS TO OUR REPRESENTATIVE TEAMS!

The following teams have been ratified by the NSBWA council to represent NSW at the Interstate Teams in Fremantle in July:

Inside the Expert's Mind 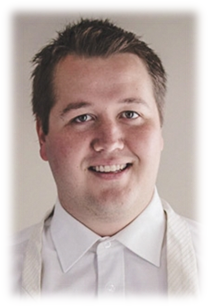 Young Victorian expert Pete Hollands is playing bridge and explaining his thought process as he goes live on the internet every week. 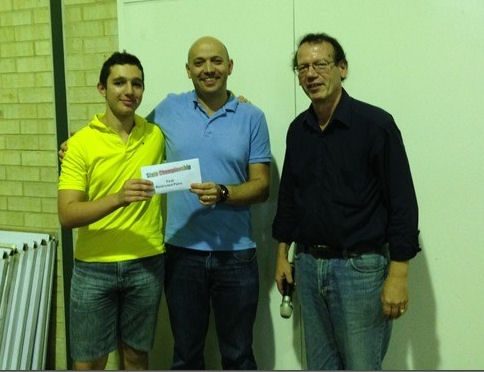 The State Restricted Pairs Championship held at the Brisbane Water Bridge Club on April 11-12 was won by Tomer Libman and Lavy Libman. Winners of the Novice Pairs were John McCaffrey and Ray Hendlay.

The council of the NSWBA is pleased to announce that from the 1st of April 2015 the regular club operations at Goulburn St will be merged with those of the Sydney Bridge Centre, which presently operates from premises in Rozelle and Henley.

Regular club games at the Goulburn St venue and at each of the existing venues will all be run under the Sydney Bridge Centre name.

The principals of the current SBC, Will Jenner-O'Shea and Vanessa Brown will be joint chief executives and will be responsible for club operations.

They will strive to provide members with a good game of bridge run by professional, competent and friendly directors. 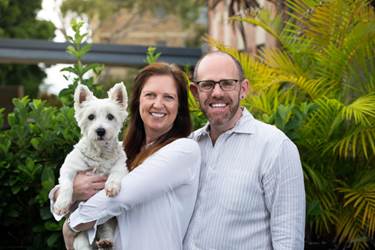 Vanessa, Will and Mac the Westie

Council sees this exciting initiative as providing a path for the growth of the club in the months and years to come. The club rooms are being upgraded to provide attractive playing conditions. There will be more sessions, lessons and development programmes provided to nurture existing members and encourage new growth.

In the longer term our plan is to obtain new premises in the city fringe which will bring the three venues together, increasing session sizes.

The NSWBA name remains but will be used for matters relating to its role as the State body administering bridge in NSW. Monday night championship events will also remain under the control of the NSWBA.

A workshop for directors will be held at the Brisbane Water Bridge Club on Friday, May 29, 9:30am-12pm.

The next Club Level Directors' course will be held at the NSWBA on Saturday May, 9.

The winner of the Seniors On-line Bridge Festival was Frank Budai, second was Enid Wolf and third Anne Rutter.

The ABF is offering $2000 travel grants and entry to the ANC Restricted Butler Pairs in Fremantle in July 18-19, see www.abf.com.au/2015-australian-national-championships-restricted-player-subsidy/.

The two top pairs in the NSW State Restricted Pairs to be held at the Brisbane Water Bridge Club on April 11-12 will be offered these grants.

The Margaret Smale 2015 Sydney North InterClub Challenge was held Sunday February 8.  North Shore won with 16 points ahead of Peninsula (13) and Trumps (11). Results can be viewed here.

The dates of the State Wide Pairs are now July 27 - August 9 to avoid clashing with the Australia Wide Pairs.

The NSWBA is pleased to announce a new event ESPECIALLY for SENIORS and residents of NEW SOUTH WALES. The NSWBA is sponsoring a Seniors On-Line Bridge Festival during Senior's Week 14th - 22nd March. The event is open to ALL bridge players whether they are affiliated or not. You just need to be a NSW resident and over the age 60. It's free to enter; all you need is a computer and a log-in. Our tournament director, Maureen Adedayo, will be very happy to assist anyone playing on-line for the first time. Please email her at

For more information go to the Seniors On-Line website.