The results for the 2018 Under 100MP Championships have been finalised. Congratulations to Paulina Martin - Ming Li from North Shore Bridge Club @ Lindfield who were the winners on handicap and to the non-handicap winners Anthea Piddington and Warwick Birch from Trumps Bridge Centre.

The final the the 2018 Grand National Open Teams  was won by SYDNEY 2 who defeated CANBERRA 2 in the final. Congratulations to Avi Kanetkar, Bruce Neill, Nye Griffiths , Johnno Newman, Pauline Gumby and Warren Lazer. 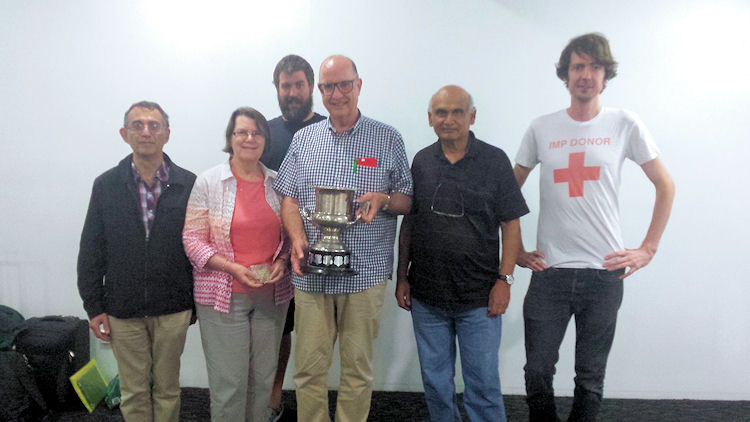 The World Bridge Federation has announced that a Mixed Teams Event will be added to the Open, Women's and Seniors' divisions at the World Teams Championships in odd numbered years. The playoff to select the 2019 Australian Mixed team will be held at the NSWBA on January 25-28, 2019.

All teams of 4 or 6 players comprising mixed pairs may enter, but non-contending teams cannot proceed to the semi-finals.

On Sunday 27 January there will be a Matchpointed Swiss Pairs Congress run in conjunction with the Mixed Team Playoff. Masterpoints will be awarded at Super Congress Level B3. Entry is via the NSWBA website.

Congratulations the the Open, Women's and Seniors' Australian Teams selected in November and December:

The State Open and Country Pairs Championships were held at the NSWBA on November 25-26. 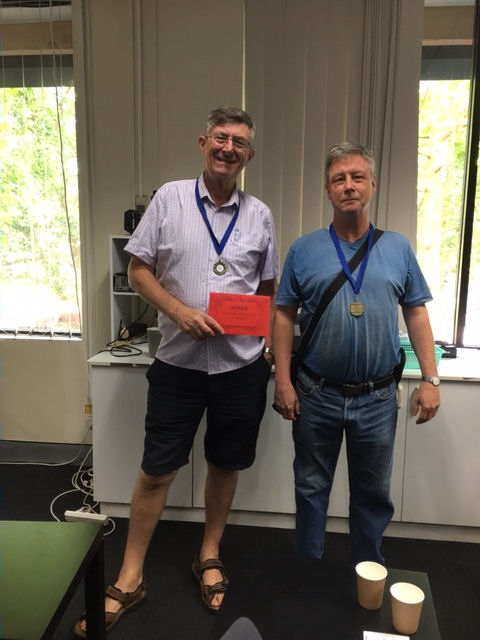 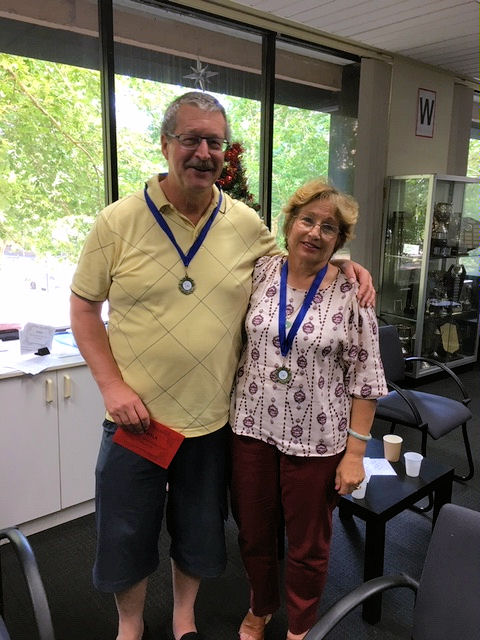 The winners of the Swiss Pairs Congress were:
Alexander Bradley and Simon Stancu 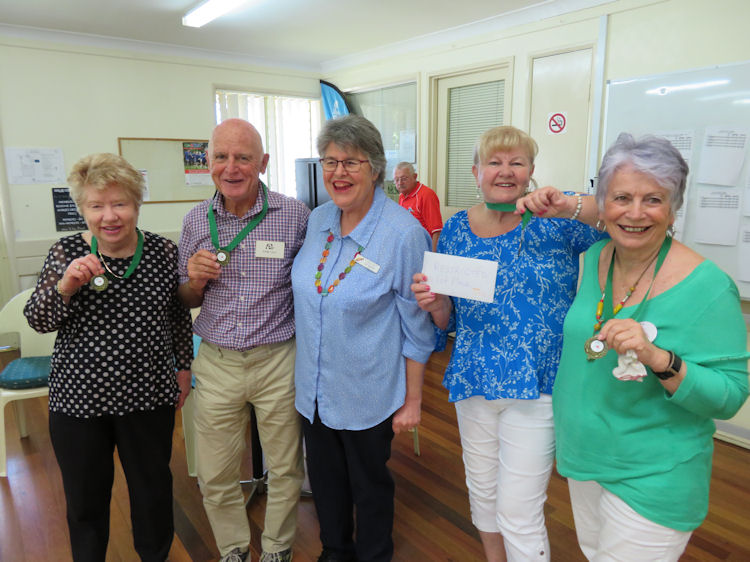 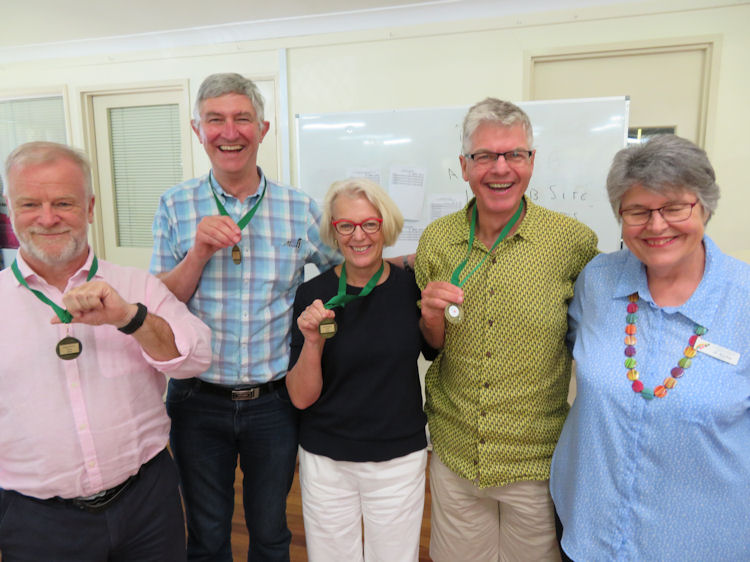 The NSWBA is conducting a survey about the Monday night championship session. This considers its current format and timing and possible changes that could be considered, depending on feedback.

An email with the link below has been sent directly to current and past players of the session (except those who have opted out of receiving NSWBA emails). However the survey is open to other interested parties as well. http://www.Swiftpage8.com/survey/MonNight2018

We would be grateful if you could spare some time to complete this survey. Feedback will be taken into account in future design of the calendar. 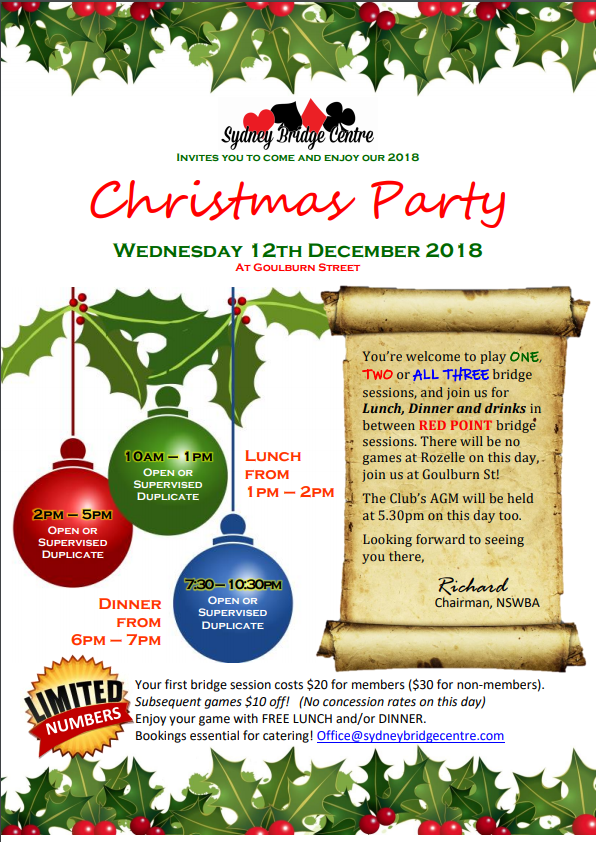 The Annual General Meeting of the NSWBA will be held on Wednesday December 12 at 5.30pm in the Ground Floor Terrace, 162 Goulburn St.

Notice and Forms will be available here.

The 2018 Annual Report is now available for viewing online.

The Seminar will be open to all. However, travel subsidies will only be available to current financial members.

This year’s runaway winners of the State Wide Pairs were Sanjay Sinha and Neville Nott with a huge score of 79% over 12% clear of their nearest challengers. They only had one below average score. Congratulations on a remarkable effort.

The next Club Level Directors' course will be held at TRUMPS on Sunday November 11, 2018.

Congratulations to all of the NSW teams at the recent ANC in Hobart.

NSW repeated our performance from 2017 by qualifying for all 4 finals and winning 3 of them. Once again there was an excellent spirit among the teams who all supported each other. Our distinctive blue team jackets also meant we stood out everywhere we went (as well as keeping us warm)! 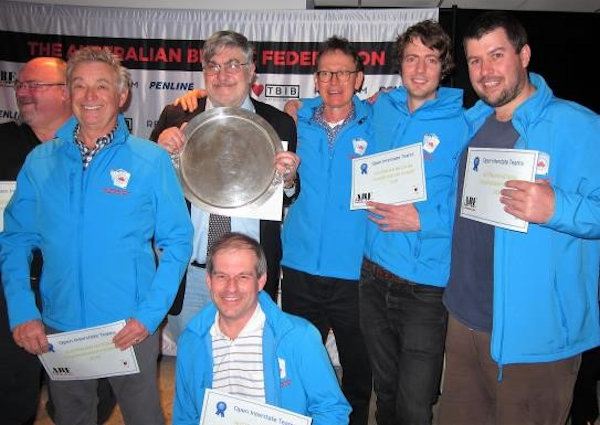 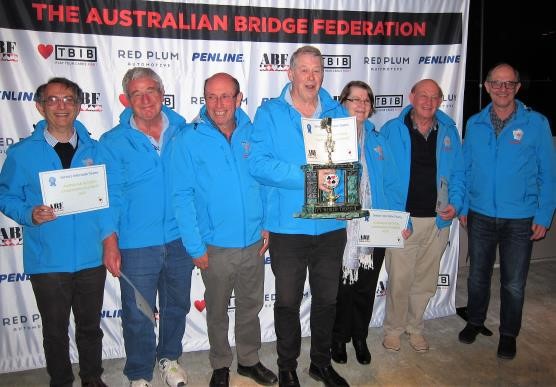 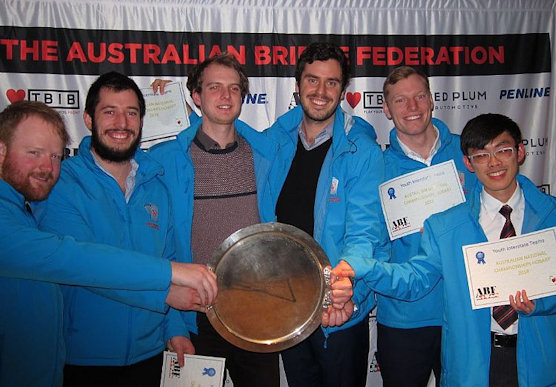 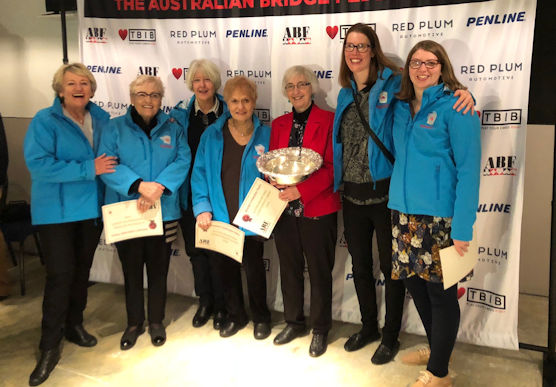 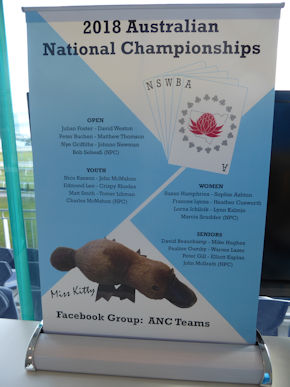 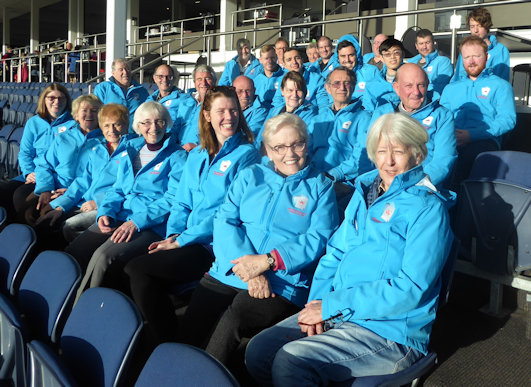 The NSWBA is seeking player feedback on the scheduling of the Women’s and Senior’s Interstate Selection events in 2019. If you have some interest in playing either of these events (Seniors must be born before 1 Jan 1959), please complete the relevant survey. Each is quite short and should take you less than 2 minutes to complete.

Nye Griffiths will be talking about high level bidding decisions at the NSWBA on Monday 27 August starting at 7pm.

Good luck to all of our representative teams who will be competing in the Interstate Teams in Hobart, 29 July - 3 August 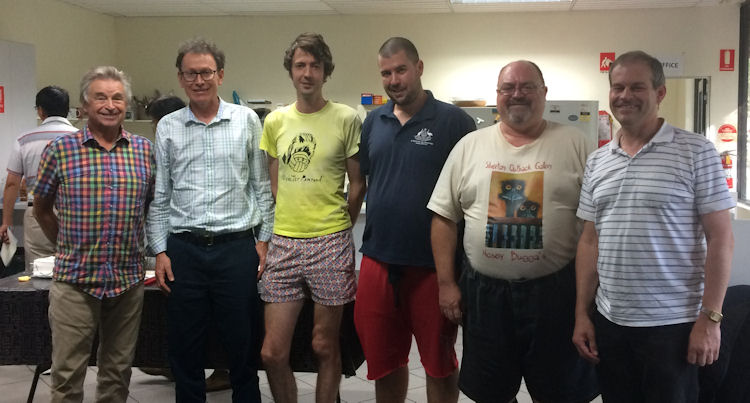 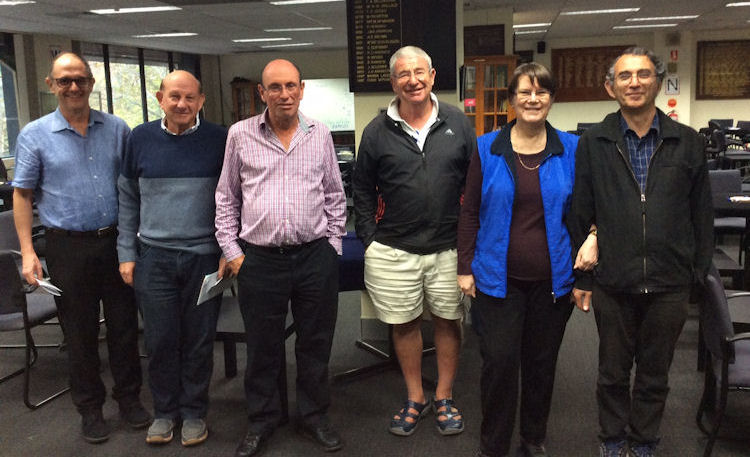 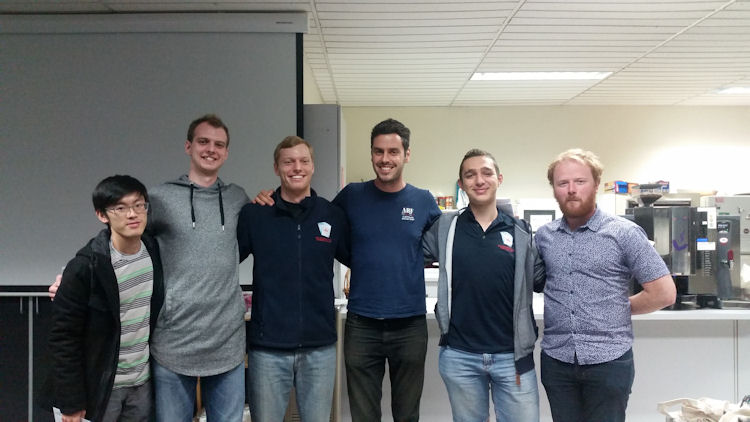 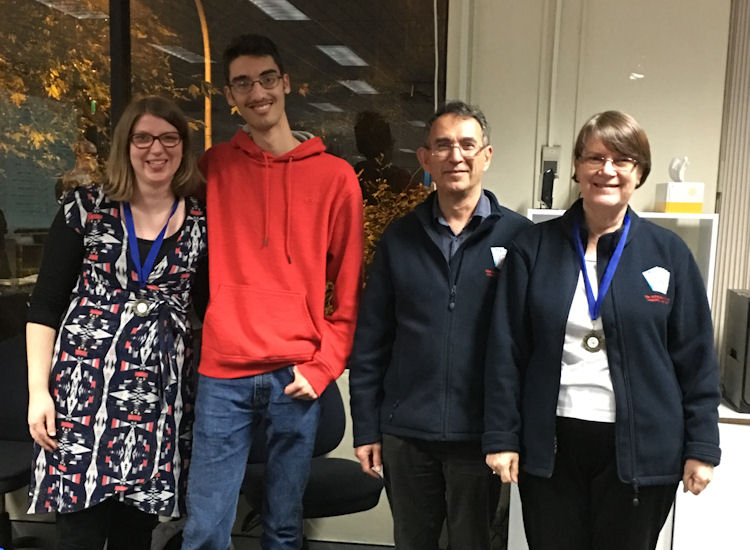 The State Mixed Pairs was held at the NSWBA on May 26-27.

The State Country Mixed Pairs was won by Bill Powell and Marjorie Askew.

Over the weekend of July 28/29, we have arranged to have the Goulburn St carpets steam-cleaned. The cleaning is being done overnight in two halves but we need to do some furniture shifting before and after. The plan is:

We already have volunteers lined up for Friday (thank you) but we are still looking for people to assist on Saturday and Sunday.

If you are able to help we would be very grateful (the more people, the quicker it will be and the less each person will have to do!)

Please contact Wing at the office if you are able to assist.
Many thanks

Congratulations to the ANC Youth Team for 2018.

Congratulations to the ANC Seniors' Team for 2018.

Congratulations to the ANC Women's Team for 2018.

Congratulations to the ANC Open Team for 2018.

The World Bridge Federation has announced that a Mixed Teams Event will be added to the Open, Women's and Seniors' divisions at the World Teams Championships in odd numbered years. The ABF is currently running a survey asking players for their opinions on how best to select the Australian Mixed Team. If you want to have your say, complete the survey.

Tony Howes will be holding a Directing Workshop on Friday 29th June 2018 at the Dubbo Bridge Club to acquaint new and experienced directors with the new laws as well as addressing other directing challenges. Participation is encouraged for all directors in the area. 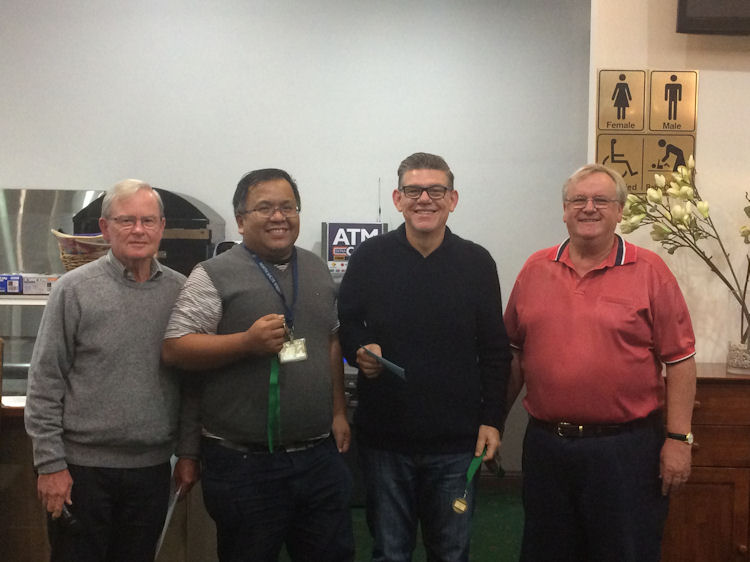 The winners of the State Novice and Restricted Pairs hosted by the Southern Highlands BC on April 28-29 were:-
Restricted: Dennis Kristanda and Terry Dunne
Novice: Robbie Feyder and Michael Hogan 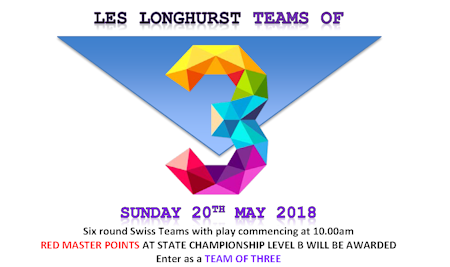 The next Club Level Directors' course will be held at the NSWBA on Saturday May 12, 2018.

The Southern Highlands Bridge Club will be hosting the State Novice and Restricted Pairs on Saturday-Sunday April 28-29 at the Highlands Golf Club, Mittagong.

As well as generous prizes for the first three places in the each of the Novice and Restricted sections, the first place getters will receive free entry to the ANC Restricted Butler Pairs in Hobart on 4-5 August 2018, a subsidy from the ABF in the form of an airfare to attend, plus a per diem allowance.

The Qualifying of the Seniors' Interstate Team Selection (SITS) to select the team to represent NSW at the ANC in Hobart in July-August will be held on Sunday April 22 with the Final on the following weekend Saturday-Sunday April 28-29.

All NSW senior players (born before Jan 1, 1959) are invited to play but by so doing they declare themselves available for the final and for the ANC.

The Women's Interstate Team Selection (WITS) to select the team to represent NSW at the ANC in Hobart in July-August will be held on Friday-Sunday April 6-8. All NSW women players are invited to play but by so doing they declare themselves available for the final and for the ANC.

Congratulations to Warren Lazer, the winner of the McCutcheon Trophy for the most masterpoints earned in 2017.

For all McCutcheon lists go to National Masterpoint Reports